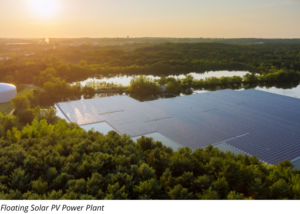 However, talks on plans to develop a solar power plant in public very rarely touch on aspects of air pollution. In fact, that aspect is enough to affect the level of insolation or sun exposure that risks reducing the effectiveness of solar power plants production.

How does air pollution affect the productivity of solar power plants?

Particulate matter (PM) 2.5 is one of the indicators of air pollution that is harmful to humans and the environment. PM 2.5 is 2.5 microns –6.8 times smaller than a human hair.

In the aspect of solar power plant electricity production, if the level of PM 2.5 in the air is higher, then the exposure to sunlight obtained by solar panels is decreasing.

Meanwhile, if the sunlight obtained by solar panels is getting less, then the production of electricity will be low. Finally, the benefits of using this technology can decrease dramatically.

As a result, based on a study published in the journal Energy and Environmental Science, Royal Society of Chemistry in 2018, the Capital Region lost about 4.3% of solar radiation exposure or about 1,721 kilowatts per cubic meter (KW/m²) per year.

Reduced sun exposure ultimately reduces the potential capacity of solar panels that are already installed. The reduction in solar power plant power capacity per 1-kilowatt peak (KWp) will reduce the stun production potential by about 57-kilowatts per hour per year.

The amount of financial losses from insolation reduction due to PM 2.5 in Jakarta is not yet known. However, in New Delhi, India, the potential loss reached the US $ 20 million or equivalent to Rp 285 billion per year. While in Beijing, China, it is predicted to lose US $ 10 million or around Rp 142 billion for roof solar power plants with a capacity of 1000 megawatts (MW).

In major cities such as Jakarta, the effective use of rooftop solar power plants depends largely on the reduction of motor vehicles. Because about 13-40% of particulates in Jakarta’s air come from motor vehicle emissions.

Meanwhile, the growth in the number of motor vehicles is about 15% per year. This trend risks further reducing power production from rooftop solar power plants in the future.

In addition to motor vehicles in major cities, the threat of rooftop solar power plant power production also comes from the forest and land fire smoke.

Compared to DKI Jakarta, this risk is very high – especially in large-scale solar power plants located in areas prone to forest and land fires. For example in musi, South Sumatra, and Bengkalis regency in Riau.

Well, in peatlands, fires will produce pm 2.5 emissions more than in other regions.

Building a solar power plant must be accompanied by pollution reduction

The price of roof solar power plant installation in Indonesia is still quite high when compared to the price of global solar power plant installation. Based on a report from the U.S. National Renewable Energy Laboratory (NREL)research institute in 2019, the average electricity cost of solar panels in Indonesia is the highest in Southeast Asia, at around US$ 165 per MWh (megawatt hour). The second highest LCOE position is occupied by Singapore which reached US $ 122 / MWh (approximately Rp 1.73 million per MWh).

Therefore, effective use and maximum electrical power yields are needed so that consumers reap a commensurate investment profit.

Although the construction of a rooftop solar power plant is a customer’s decision, the government still plays an important role to implement policies related to reducing air pollution levels. Hopefully, solar radiation exposure can increase and roof PLTS is more productive.

Currently, the government plans to incentivize people to use rooftop solar power plants with a policy of incentives for electricity prices to producers(feed-in-tariff) so that clean energy use can squirm. But it’s not enough. The government is expected to also tighten emissions from the transportation sector so that air pollution levels decrease.

The new government will implement the Euro 4 standard to limit particulate emissions from diesel cars. This standard tightens the content of materials such as carbon dioxide, nitrogen oxides, carbon monoxide, which are stricter in fuel oil. However, the implementation of the policy could also potentially be delayed to 2022.

Another way to prevent rising emissions is the switch to the use of electric vehicles. Steps to increase the number of public transport users could also be a solution.

In addition to emissions from the transportation sector, steam power plants (PLTU) around Jakarta also account for about 20-30% of emissions in the capital. Therefore, efforts to reduce stun generation from coal plants are important.

Meanwhile, for medium and large-scale solar power plants that are being developed in areas prone to forest and land fires, the government and private sector should conduct a thorough analysis of the level of sun exposure in the area. This should be done when the project is in the location planning stage.

That analysis is needed because of the considerable solar power plant development target: about 328.8 MW.

Emission reduction and solar radiation exposure analysis are things that can be taken to help customers and investors get maximum profits. As a result, emissions can be reduced, and solar power plant productivity increases. In the end, the two efforts helped Indonesia to mitigate the effects of the climate crisis.

This article was originally published by The conversation, on September 08, 2021, in Bahasa, Indonesia and has been republished in accordance with the Creative Commons Attribution-NonCommercial-NoDerivatives 4.0 International Public License. You can read the original article here. The views expressed in this article are those of the author alone and not of the WorldRef.