Large conglomerates have continued to finance coal even after the Paris agreement. Commercial banks are providing more money to the coal industry than in 2016.

A look at the Coal Industry, it’s financiers and how even after the Paris agreement investments in Coal Industry have not slowed.

Large conglomerates have continued to finance coal even after the Paris agreement. The reason being that coal is a cheap source of energy. Commercial banks are providing more money to the coal industry than in 2016.

As investments in coal are increasing we are leaving the Paris climate goals behind and if we don’t do anything about it then those goals may well be out of reach. So let’s take a look at the present scenario. 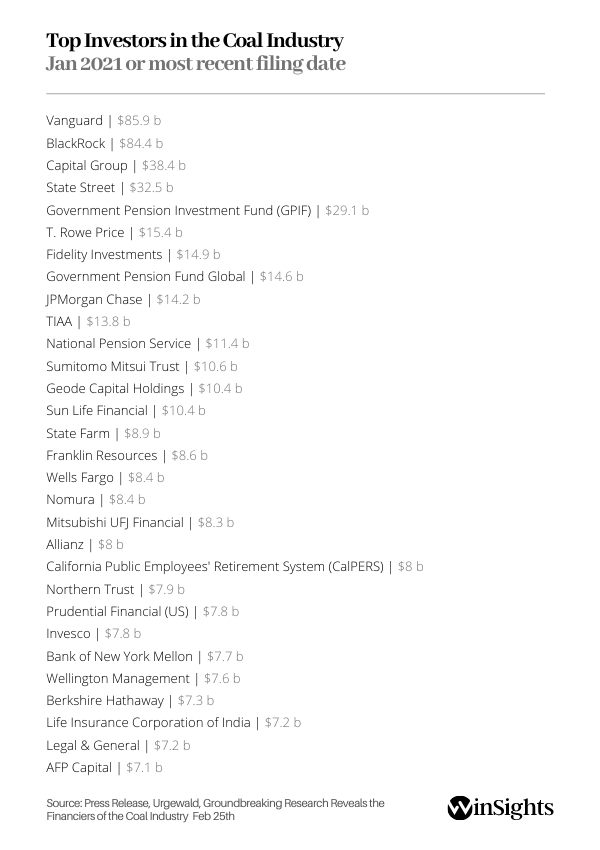 With holdings of US$ 81 billion, investors from Japan account for the second highest share of institutional investments in the coal industry. Japan’s Government Pension Investment Fund alone holds bonds and shares in value of US$ 29 billion in companies listed on the GCEL.

The third largest group are UK investors, whose collective holdings in the coal industry amount to US$ 47 billion.

The Biggest Lenders to the Coal Industry

Urgewald’s research identified 381 commercial banks that provided loans totaling US$ 315 billion to the coal industry over the past 2 years. The top 3 lenders are the Japanese banks Mizuho (US$ 22 billion), Sumitomo Mitsui Banking Corporation (US$ 21 billion) and Mitsubishi UFJ Financial Group (US$ 18 billion). The 4th and 5th largest lenders to the coal industry are Citigroup (US$ 13.5 billion) and Barclays (US$ 13.4 billion). A regional breakdown of lenders from different countries shows that Japanese banks collectively provided US $ 76 billion in loans to the coal industry between October 2018 and October 2020. Next in line are banks from the United States (US$ 68 billion) and banks from the UK (US$ 22 billion). Commercial banks from these three countries alone accounted for 52% of total lending to companies on the Global Coal Exit List over the past two years. The Biggest Underwriters to the Coal Industry

Over the same time period, 427 commercial banks channeled over US$ 808 billion to companies on the Global Coal Exit List through underwriting. The world’s top 10 underwriters are all Chinese financial institutions.

Commercial Banks’ Support for the Coal Industry has increased since the Paris climate agreement was signed.

Commercial banks’ are channeling more money to the coal industry than in 2016, the year the Paris climate agreement came into force.

What Needs to be Done?

Climate change is a real threat that needs to be acknowledged. Investments from coal should be withdrawn. However, that is easier said than done.

The bulk of coal investment, lending and underwriting can be traced to financial actors in a dozen countries. The government of these countries should work in tandem with the companies that are funding coal to direct their investments into more environmentally friendly energy sources. Global supply chain interruptions, closed borders, and trade conflicts raise the specter of nations turning inward and disconnecting from one another. But Princeton’s Harold James thinks Covid-19 may well push us all closer. [...] Learn everything there is about Green Hydrogen & Blue Hydrogen, and future of energy. This is your Hydrogen primer. [...] Common assumptions about the green energy transition are fast becoming outdated. This new energy system, which is already being built, will benefit the planet and future generations – and the sooner we lay the myths to rest, the better. [...] Let’s Make Peace With Our Planet in 2021

Even if we declare a truce today and start to live more sustainably, it will take decades, if not centuries, for Earth to recover. [...]