Has Global Income Inequality Increased in the Last 100 Years?

Over the last 100 years there has been vital reformation in global income distribution which shows that we are heading towards ending global income inequality in the near future.

Over the last 100 years there has been vital reformation in global income distribution which shows that we are heading towards ending global income inequality in the near future.

Between 2008 and 2013, global inequality fell significantly for the first time since the industrial revolution.

Populous countries like India and China were the main reason behind this historic fall in global inequality as there was significant growth in average incomes in these countries.

Despite this progress, two-thirds of the world’s population is still facing global income inequality due to the differences in average incomes between countries.

Since 1956 there has been a significant decrease in income inequality across many countries. Inequality of income has decreased in countries like Argentina, Mexico, Peru, Brazil, Ecuador, India and the United States whereas it has tended to increase in some countries like Paraguay, Costa Rica and Venezuela (Graph 1).

Gini coefficient often referred to as the Gini index or Gini ratio is a measure of the distribution of wealth across a population. It represents the wealth or income inequality within a country or over a certain population.

However, a Gini coefficient is not an absolute measure of wealth or income. It only measures the dispersion of income or wealth.

Graph 2 shows the Gini coefficient of countries for the year 2019.

Income Distribution Around the Globe

The income distribution around the globe is uneven; economically strong countries like the United States, Japan and China have higher GDP per capita compared to poor countries like Afghanistan, Burundi and Uganda.

Distribution of Population Based on Income Levels-

Population can be divided into three sections based on income levels:

The most remarkable change happened between 2001 to 2011. During this period poverty decreased significantly. In 2001 the poor population was at 1.6 billion, but by 2011 the number fell to 949 million.

In 2001, the middle-income population was 398 million and by 2011, it moved up to 783 million showing a notable increase. During the same time period the high-income population increased from 340 million to 428 million.

How Have Incomes Changed Around the World?

Over the last four decades, world income has changed drastically. The advancements in technology and industry have brought job opportunities providing people higher incomes for their labor and hard work. Many poor countries in Southeast Asia have grown faster than many other rich countries. 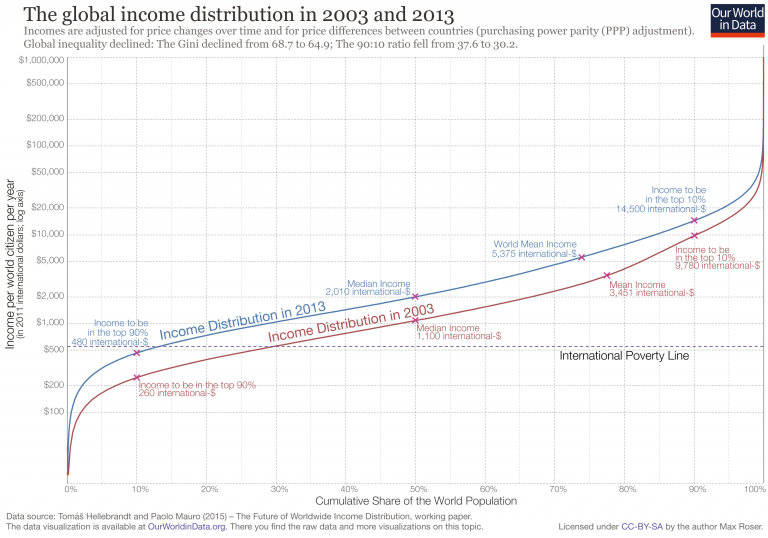 Globalization, industrialization and technology has brought many changes in economic policies and income distributions around the world. Economic growth gave many opportunities to new businesses and industries to flourish and embed their roots in the global market.

The flow of income increased the average salary of middle class people. The tax relaxation and other economic policies provided by the government helped the weaker sections of the society to become financially stable. Despite all this, why do 3.4 billion people still struggle for basic necessities and almost 63% of people have to live on less than $10 per day?

The average income of people in many countries is very low which needs to increase if we want to tackle global poverty, and that can only happen with substantial economic growth.

By 2035, global income inequality is projected to decline significantly, reforming our standards of living. The economic growth in emerging- market economies will boost global income. In the coming decades the world population and income will grow exponentially bringing rapid changes in the world economy. The global Gini coefficient is predicted to decline from 65 in 2013 to 61 in 2035.

Global income has drastically changed over the last few decades, and the future projections of global income seem to be thriving. The pace at which we are moving will certainly decrease global inequality making the middle class financially strong and stable. In economics, the term ‘Convergence’ explains that poor countries will tend to grow at faster rates than the rich countries, also known as the catch- up effect. This theory is based on the law of diminishing marginal returns, applied to investments. In terms of reducing global income inequality we have improved significantly but there are still countries that lack basic standards of living. Countries like India, China and Singapore have grown economically strong with time however countries like Somalia, Sudan and Burundi are still struggling to meet their needs.

To be precise, global income inequality over the last 100 years has decreased and if we take a look at the bigger picture we have made huge progress with time but ending global inequality needs much more to it.