With a population of 277 million, Indonesia stands as one of the largest economies in the world. Its prominence in the Southeast Asian region has increased considerably over the past few years and this development is largely attributed to its ever-growing role in international trade.

As of July 26th, 2021, Indonesia’s population stood at 276.6 million making it the 4th largest country in the world in terms of population. Not only that but Indonesia is the world’s 10th largest economy in terms of purchasing power parity and a member of the G-20.

Its influence in the Southeast Asian region is considerable. It is also a member of the Association of Southeast Asian Nations (ASEAN). In 2020, Indonesia ranked 73rd out of 190 countries in the World Bank’s Ease of Doing Business Index.

A country like Indonesia has tremendous growth potential. After mild recessions during the pandemic, Indonesia’s economy is projected to rebound by 4.4% in 2021. The growth is projected to increase to 5% in 2022, assuming a faster vaccine rollout.

Indonesia’s success can be attributed to improvement in global trade as well as stronger investments. In 2019- 2020, Indonesia had a trade surplus of about $21 billion.

In 2019, Indonesia ranked 16th in terms of GDP and 30th in terms of total exports and well as imports. It also obtained 68th place in OEC’s Economic Complexity Index (ECI).

With net exports growing year on year, Indonesia is growing at a steady pace.

Indonesia imports and exports a multitude of products and services and it’s an important trading partner for many countries.

In terms of the total volume of trade, its top trading partners are China, Singapore, Japan, United States, India, South Korea, Malaysia and Thailand. Together these countries account for almost 62% of Indonesian exports as well as over 68% of Indonesian imports. Indonesia’s largest destination for its exports is China with it accounting for over 12% of Indonesian imports. The top commodities are coal briquettes and palm oil. Other commodities include petroleum gas, rubber and lignite. 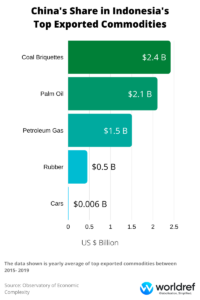 In terms of commodities imported, China stands as Indonesia’s biggest source of imports with it averaging imports of approximately $38 billion from 2015-2019 with a share of over 24% in Indonesian imports during the same time frame.

The main commodities of import were telephones, refined petroleum and vehicle parts. It is interesting to note that China is Indonesia’s top trading partner, both in exports and imports. Singapore stands as the 2nd largest source of Indonesian exports, averaging imports of approximately $21 billion from 2015-2019 from Singapore. The main commodities of import are refined petroleum and telephones.

Together these commodities made up approximately 29% of Indonesian exports. This shows that Indonesia exports a variety of products and has a diversified export sector.

Apart from cars, all the other commodities registered a slump in terms of both volume and value of trade in 2016 and 2019. The latter was because of the economic downturn induced by the pandemic. From 2018 to 2019, exports fell by $12 billion.

Indonesia averaged imports of over $156 billion per year from 2015-2019. Indonesia enjoys a healthy trade surplus because its exports have always exceeded its imports.

Together these commodities made up approximately 18% of Indonesian imports. Refined petroleum stands as the largest commodity in terms of share in Indonesian imports. Indonesia averaged imports of over $13 billion per year from 2015-2019 of refined petroleum.

Singapore stands as Indonesia’s largest source of refined petroleum with it averaging exports of over $8 billion per year during the same time frame.

All the commodities registered a slump in terms of both volume and value of trade in 2019. Total imports fell by as much as $15 billion. This was attributed to the economic downturn induced by the pandemic.

Indonesia suffered milder recessions compared to other countries and has already bounced back.

Countries like China, Singapore, Japan and the United States are very important trading partners of Indonesia. Indonesia has strengthened ties with existing trading partners and is building new relationships each year.

Saudi Arabia for instance has been a vital trade partner for Indonesia. Crude petroleum is Indonesia’s 2nd largest commodity in terms of imports and Saudi Arabia is its largest supplier, accounting for over 29% of total imports of crude petroleum.

Countries like India and the Philippines may not get much attention when it comes to Indonesia’s international profile but they are crucial in their own regard.

Indonesia has a very diversified trading profile with multiple trade partners. The relationships that Indonesia has made through the years have benefited it immensely and have become all the more crucial for Indonesia’s growth. With its international presence increasing every year, Indonesia is sure to climb a couple of notches in terms of trade if government policies are effective.